skip to main | skip to sidebar

The Plural "I" : group exhibition at Davis Orton Gallery

A group exhibition at Davis Orton Gallery, exploring diverse visions about queerness through photo-based works & video that question the binary, resists the prescribed gender norms & challenges assumptions about the ways things are placed within neat boundaries. 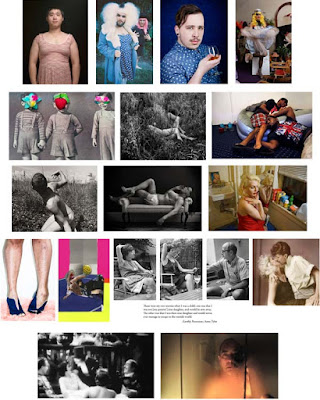 Clockwise from top left: Giovanna Sarti, Barry Gerson, Nandita Raman, Duy Hoang.
Barry Gerson - Duy Hoang - Nandita Raman - Giovanna Sarti
On Permanence and Change
July 1 – 25, 2014
Opening reception: Tuesday, Ju
​l​
y​
1, 6-8:30 pm
Thomas Erben is pleased to present an exhibition of four artists: Barry Gerson, Duy Hoang, Nandita Raman and Giovanna Sarti. Though the practices of these artists are visually and conceptually diverse, the show finds its unity in a selection of works dealing with the relationship between transformation and permanence – how to incorporate continuous change, such as in natural processes, into distinct objects.

Nandita Raman’s photographs are centered around objects – natural and/or man-made – often in a state of slow transformation or accumulation. A mountain face is gradually eroding; a tiny aircraft incrementally makes its way across a vast sky; stacked sheets of paper resemble layers of sediment. Exhibition space and viewer are brought into communication with these brief excerpts of long-term transition through the addition of mirrors, sometimes with images mounted on the back, sometimes placed so as to reflect a photograph into the room. As reflections move and turn, the act of looking is infused into each image, renewing and complicating the subjects at hand.
Nandita Raman (b. 1980, Varanasi, India) received her BA at the University of Delhi in 2008, and her MFA at ICP-Bard in 2012. Her work has been exhibited most notably at the Center for Documentary Studies, NC, and Columbia University. She is a recipient of the Daylight/CDS Project prize (2010) and the Sarai Independent Study Fellowship (2006). Raman's work has been published in Harper’s Magazine, Conveyor Arts and The Sunday Guardian, among others. The artist lives and works in New York and is currently advised by Payal Arts International.
Using sculpture and installations, Duy Hoang pays minute attention to the spaces he builds and inhabits. Often including plants, Hoang seems to mimic and expand on structures of nature in his precarious constructions, carefully observing each detail in something that can resemble archeology or a crime scene investigation. Having focused on the concepts of survival and trapping in his recent work – as in It Was Very Generous of You to Hold a Funeral for Me (2014), where a heavy table teeters on the edge of a chair, seemingly ready to fall once a wire is sprung – Hoang this time presents us with a scene after the fact, tracking the marks and traces of a trap already set off.

Duy Hoang (b. 1989, Vietnam) received his BFA from the University of Massachusetts in 2013, and was recently accepted to the MFA program at Columbia. His work has been exhibited at the Lorber Family Gallery (Tel Aviv); Ginnell Arts Center Gallery (Iowa); The Revolving Museum (Lowell, MA); and Howard Art Projects (Dorchester, MA). He received an Outstanding Academic Achievement in Fine Art at the University of Massachusetts, and is currently working on his Drawing Residency at The Arts Research Collaborative (Lowell, MA).
The transparently layered visuality of Giovanna Sarti’s paintings echoes the materials used, bringing to mind alchemical or geological processes. Working on a wide range of scale, Sarti employs pigment, ink, charcoal, varnish and metal dust, which react – some over time – in unpredictable ways, resulting in images that remain in continuous transformation. Channeling impulses from other disciplines such as music, writing and various visual arts, and with a keen awareness of the medium’s genealogy, she manages to infuse a historical style with new relevance.

After studying in Italy, Giovanna Sarti (b. 1967, Cervia, Italy) attended the Städelschule in Frankfurt (1996-2000), where she was a “Meisterschülerin” of Per Kirkeby. She currently has a solo exhibition at the Kunsthalle Lingen (Germany). Over the years, her work has been exhibited in numerous venues such as Autocenter (solo), Deutsche Bank KunstHalle and Galerie Sandra Buergel (all Berlin); Portikus (Frankfurt am Main); Kunsthalle Exnergasse (Vienna), to name a few. The artist lives and works in Berlin and Cervia, Italy.
Barry Gerson has been exploring the essence of filmmaking and cinema since the 60s, developing an ever increasingly eloquent and precise formal vocabulary. In the film Translucent Appearances (1975), he transforms the simultaneously static and endlessly changing nature of a waterfall into an abstraction almost resembling painting. By blocking out parts of the image, the artist lets us focus on only a limited part of a constant process, isolating it into something simultaneously permanent and changing.

Barry Gerson, (b. 1939, Philadelphia, PA) whose current practice includes video, cinematic fragment pieces and mixed painting/photo works, is most noted for his films, which have been on display in solo exhibitions at The Whitney Museum (1976, 1978), MoMA (1970, 1978, 1985), The Guggenheim (1971) and many other venues internationally. His work was included in The American Century, The Whitney Museum (2000) and in shows/screenings at Montreux Film Exhibition, Anthology Film Archives, Leo Castelli Gallery, Louisiana Museum of Modern Art (Denmark), Moderna Museet (Stockholm) and Stedelijk Museum (Amsterdam), to name just a few. Such institutions as MoMA, the Museum of Modern Art (Stockholm), and the Centre Pompidou (Paris) have his work in their collections. 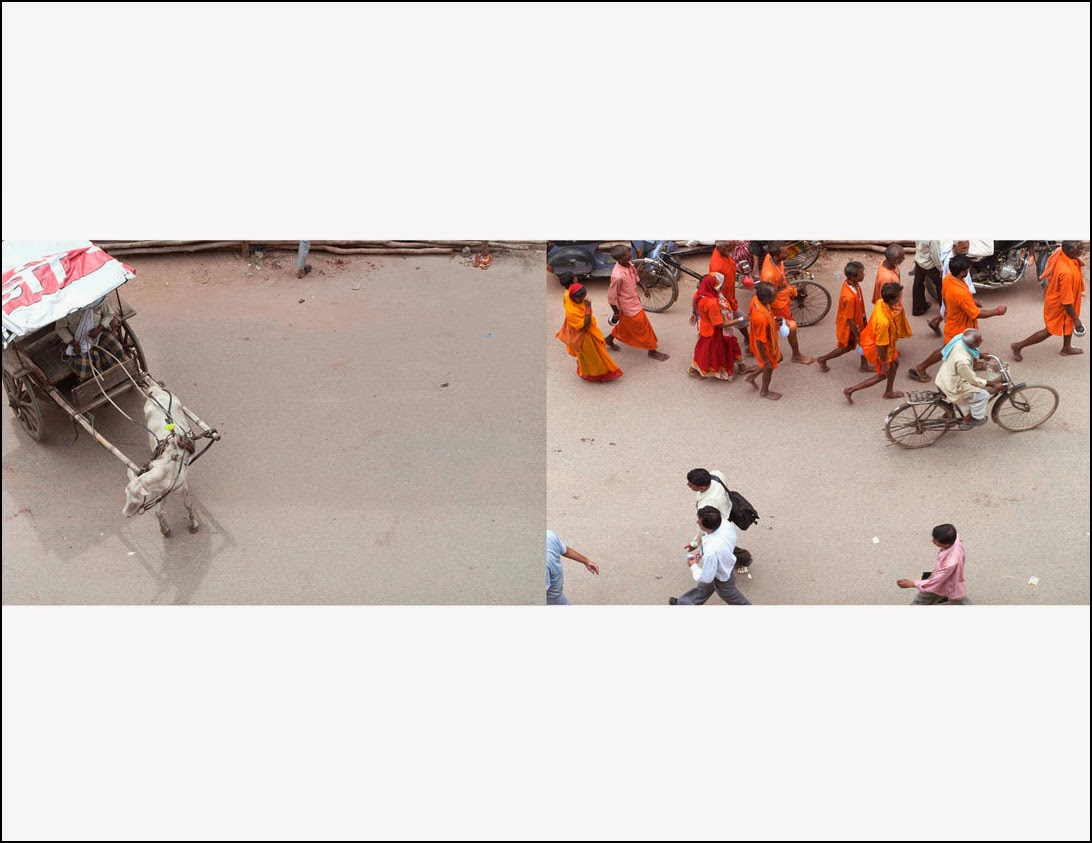 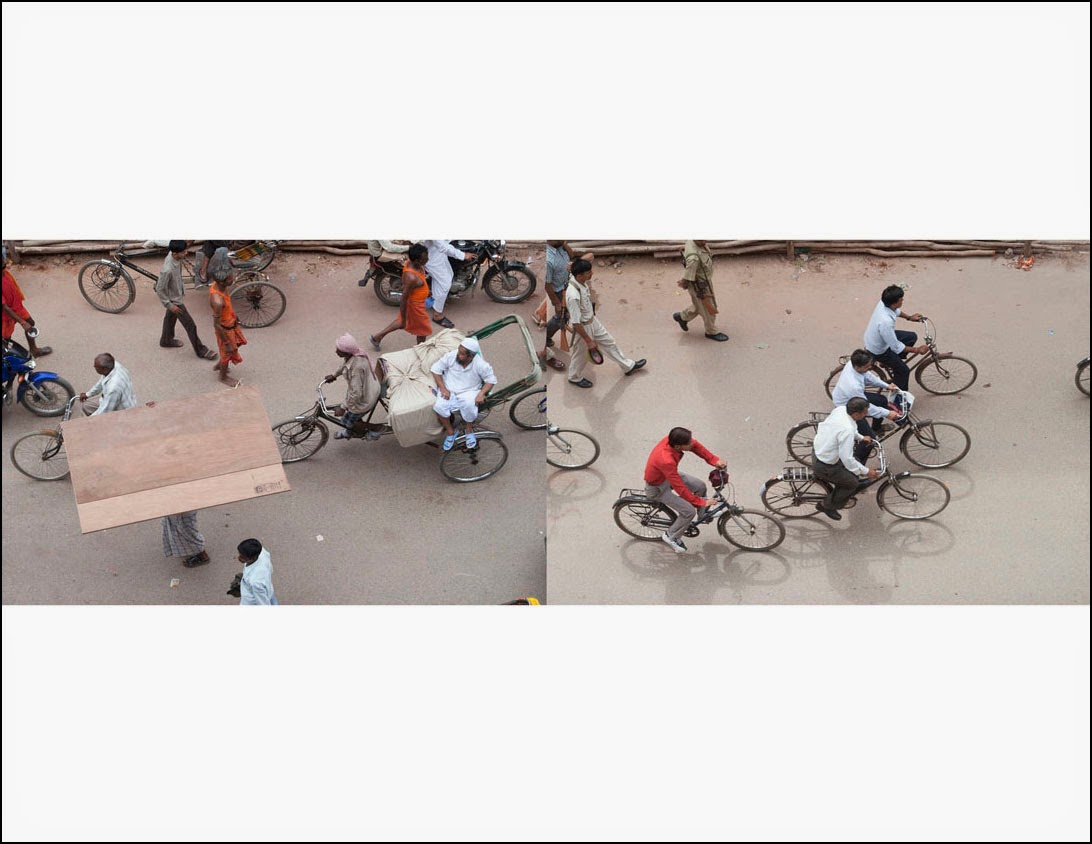 I'm talking to artists about what nurtures them as people. What sort of communities do they seek? How do they support art making? What are their current concerns and challenges? The conversations are about 30 min audios on Camera Club of New York's Blog. Download it and listen on the subway, play it in your car or in your most active moments of horizontal existence. If you have suggestions do write to me.
http://cameraclubny.org/ccny_blog/ 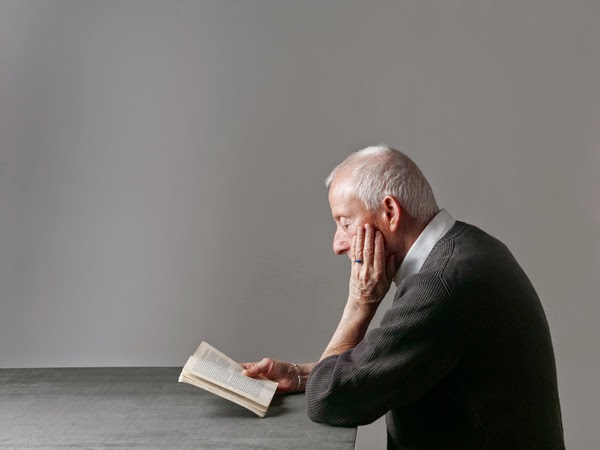 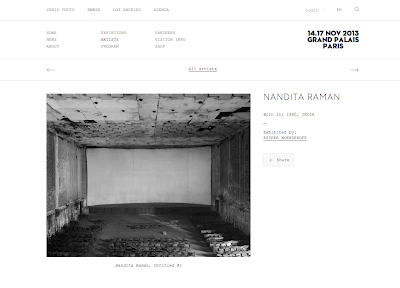 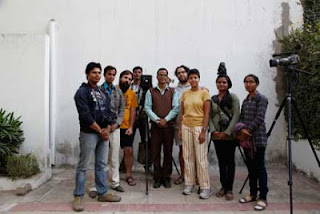 I, Brian Paumier and Joaquin taught a workshop to the undergrad students of fine arts at B.H.U (Banaras Hindu University), Varanasi in December 2012. Supported by Kriti Gallery.
No comments: 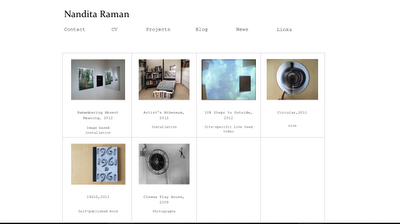 My Website is up and running. Take a look.

Nandita Raman
Nandita Raman (1980, India) is a visual artist working with image based mediums. She has exhibited in Chicago, New York and North Carolina. Her works are in the collection of the Snite Museum of Art. She is a recipient of the Sarai Independent Study Fellowship 2006 and the Daylight/ CDS Project prize 2010. Her work is published in Moment, Elle India, Flair Italy, Outlook, Timeout Delhi and The Guardian. Raman received an MFA from the International Center of Photography- Bard program in Advanced photographic studies in 2012. She studied fashion communication at National Institute of Fashion technology and has produced and directed documentaries and ad films. Email: ramannandita@gmail.com